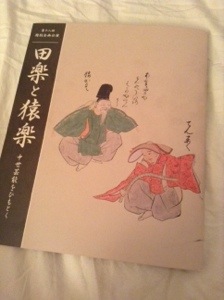 Yesterday I went to see Dengaku to Sarugaku at the National Bunraku Theatre in Osaka. Two groups, the Nachi Dengaku Hozonkai (Nachi, Wakayama pref.) and the Nara Tsuhiko Jinja Okina-mai Hozonkai (Nara) preserve ancient traditions that are thought to predate the performing art we call Noh today. Dengaku (literally ‘field entertainment’, where ‘field’ refers to ‘rice paddy’) is a form of performance where musicians playing taiko and sasara (a kind of wood clapper) dance in symmetrical patterns, at the accompaniment of extremely simple and repetitive musical patterns. Movements mime sowing the fields, evidence of its original purpose of propitiating good crops. Sarugaku (debate is open on the literal meaning of this word) is the old appellation of what we now call Noh. On this occasion the Tsuhiko-jinja troupe performed Okina-mai, a predecessor of the contemporary Okina performed by Noh actors. I won’t get into the discussion on the ‘authenticity’ of such dances – forgive the superficiality of this post.

What can I say about the performance… I took extensive notes. Mostly because I was very bored. As I was looking around, noticing how many people around me were dozing off, I thought of Peter Brook’s ‘rough theatre’ misplaced in a ‘serious’ situation, and of Rustom Bharucha’s talk of ritual performance as something that cannot be detached from its original context. Technically speaking performances such as those I attended today require to be performed at a shrine, on a lawn, in the presence of many people surrounding the performers, chatting, taking pictures, eating, sleeping, moving around.. a ‘rough’ setting. I think that one of the reasons behind the reiteration of simple dance and music sequences is the need to offer a performance that can be ‘followed’ even if distracted or interrupted, something very different from a theatre hall performance, where the audience is sitting, forced to stare at the stage, as we were today.

Moreover, yesterday’s performers were amateurs, whose lack of technique is all the more evident on a ‘proscenium arch stage’. As I wrote on my notes, religious performance contains values transcending the aesthetic: when it’s placed on a theatre stage it loses all true ritualism. All that is left is art, and art requires technique, not belief.

3 thoughts on “Dengaku to Sarugaku”