Hello, everyone. I have not posted for a while on this blog. Recently I have been pretty busy with my new job at Kyoto Sangyo University, as well as with various research projects in which I am involved. Also, I have been busy preparing for a training run-through of the play Hagoromo. This performance took place in the context of a kenkyū-kai, which is a training session organized by Udaka Michishige, in which his students (including me) take turns performing noh excerpts or, as in this case, full noh plays. This time I took the shite role in the full noh Hagoromo, which I performed in plain kimono/hakama, but wearing a mask. In the latter part of the play, I also wore the chōken cloak which symbolizes the robe of feathers. This was an approximation of a full performance and served the purpose of helping me familiarize with how it feels to perform with a mask and with a chōken. So, how does it feel?

Wearing a noh mask severely restricts the actor’s vision. In particular, peripheral vision is obstructed, and one can only see ‘in front’. What ‘in front’ means may depend on the mask and how it fits on your head. In the case of the zō-onna mask I wore yesterday, ‘in front’ meant in ‘in front and slightly below’, though not ‘below’ enough to allow me to see the stage as I walked towards its edge. The risk of falling from the stage is real. I saw that happen to someone else last year, and it was not good. In the case of practice sessions like these, the instrumentalists are sitting on the floor rather than on stools, which makes it hard to find the end of the part of the stage where the actor is supposed to dance. Obstructed sight impacted on my sense of position on stage. Where am I? How far am I from point A? How many steps can I take before I get to the edge?

One more thing that I noticed is that I had trouble measuring not only distances but also angles. Some movements request you to face different directions: as long as someone is standing in front of you, you know where to point, but when you need to face the front of the stage, what do you rely on in order to be sure to be facing the front, perpendicular to the edge of the stage? Chairs lined up in parallel lines in front of you may help. Also, it is possible to use architectural elements at the bottom of the hall as a reference to guess how centered one is on stage. 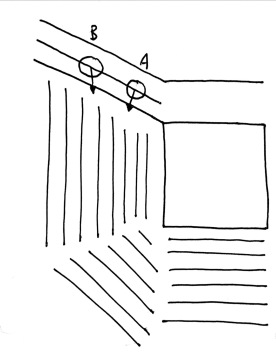 I found the angle issue particularly challenging when facing the audience (no audience this time, just empty chairs) while standing on the hashigakari bridge. The hashigakari is not perpendicular to the main stage but follows a diagonal line. Hence, if I stand on the bridge with my feet perpendicular to its edge, I would be facing somewhere between the front and stage right, looking away from most of the audience. I tried to draw this – not sure you guys can see what I mean. Should I adjust my angle to actually face the audience? This is something I had not considered until I got on stage yesterday. (We do not use a hashigakari in usual training).

Training sessions like these are useful precisely because they urge you to think about aspects of performance that cannot be really appreciated until you try them first-hand. I am grateful I had the chance to perform Hagoromo this time.

Photos below come from a trip to Yogo Lake 余呉湖 (just north of Biwa Lake) I took a few months ago. Yogo Lake is one of the many areas in Japan transmitting local versions of the Hagoromo legend (the most famous one being set in Mio, currently Shizuoka Pref.) In this version, the Angel descended on Yogo Lake and married the fisherman who took away her robe. The couple had several children, but the Angel eventually returned to the heavens. One of the children was particularly intelligent and eager to study, so he was sent to study with a monk living in a monastery nearby. The monk recognized the child’s exceptional talents and sent him to Kyoto to continue his studies. The child grew up to be none other than Sugawara no Michizane, one of the most celebrated figures in Japanese history and literature, who would be deified post-mortem as god of poetry!