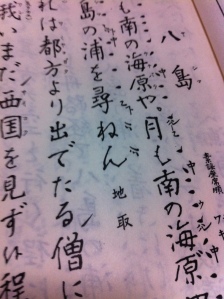 Recently I have attended a number of Noh performances where actors or chorus members would forget their lines. I am not talking about amateurs but professional actors on important stages. Some might find this surprising: forgetting lines would be inadmissible in other kinds of theatre. Imagine a super-famous tenor, or a Shakespearean actor forgetting what they had to sing or say during a performance at La Scala or at The Globe. Unthinkable as it might be in other contexts, this kind of mistake is fairly common, and to a certain extent accepted, in Noh.

How so? There are various reasons I can think of:

Concluding, I hope this won’t happen to me during the forthcoming Kiyotsune! It is accepted, but better not to have the audience accept it!