Today I went to the second Sōichirō-no-kai performance, organised by young Kanze school shite actor Hayashi Sōichirō. The main performance was Matsukaze, performed by Sōichirō and Sakaguchi Takanobu. The Kanze Iemoto, Kanze Kiyokazu (whose name is written 清河寿 and not 清和 starting this year) was the chorus leader, but also performed the maibayashi Tōru, shaku-no-mai kogaki (staging variation) before Matsukaze. Since I will perform the maibayashi from the Noh Tōru next August I thought I would go and watch this performance.

What an interesting performance! The normal version of Tōru features a haya-mai rapid tempo dance in 5 dan or sections. The Kongō school usually stages it as banshiki haya-mai, where banshiki indicates a shift in the flute mode during the second section (shodan). Among the variations in the Kongō repertoire is also the extremely demanding jū-san-dan no mai, or 13 movements dance, which Udaka Michishige danced last year at the National Noh Theatre in Tokyo. 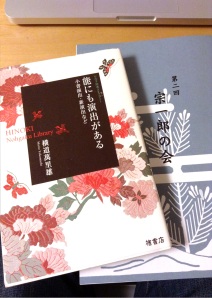 The shaku-no-mai (酌之舞) kogaki, exclusive of the Kanze school, begins with a special tachimawari circling of the stage, followed by a shortened version of the hayamai, filled with special movements (for example the tappai position that signals the beginning of the dance is unusually performed while kneeling at jō-za, in front of the taiko player). What makes this kogaki particularly special is that the initial tachimawari is actually derived from the okina-no-mai dance in the ritual Okina. The shite goes to sumi (downstage right) and waki-za (downstage left) and stands still facing front while the flute plays one long, piercing note. In the context of Tōru I interpreted this as the spirit of the minister Minamoto no Toru contemplating the scenery of his villa in Kyoto (and the scenery of Matsushima and Michinoku that the villa itself reflects), his heart filled with nostalgia. It is a rather intense moment. Then the shite stamps exactly like in Okina, before completing the tachimawari and getting ready for the beginning of the actual hayamai.

Another interesting thing is the name of this kogaki. The Kanze school performs the 酌之舞, where 酌 (shaku) is the act of pouring beverages, in this case rice wine. In the play,  the spirit of the minister Minamoto no Tōru observes the full moon reflected on a cup of rice wine, as he used to let cups flow on the surface of the artificial sea he created within his Kyoto residence, Kawara-no-in, during the banquets he used to hold there. However, Konparu, Kita and Hōshō schools perform the 笏之舞, where 笏 shaku is the wooden rod that was part of the formal gear of high ranking aristocrats such as Minamoto no Tōru, and that nowadays only shinto priests use. In this variation the shite uses an actual wooden shaku instead of the fan.