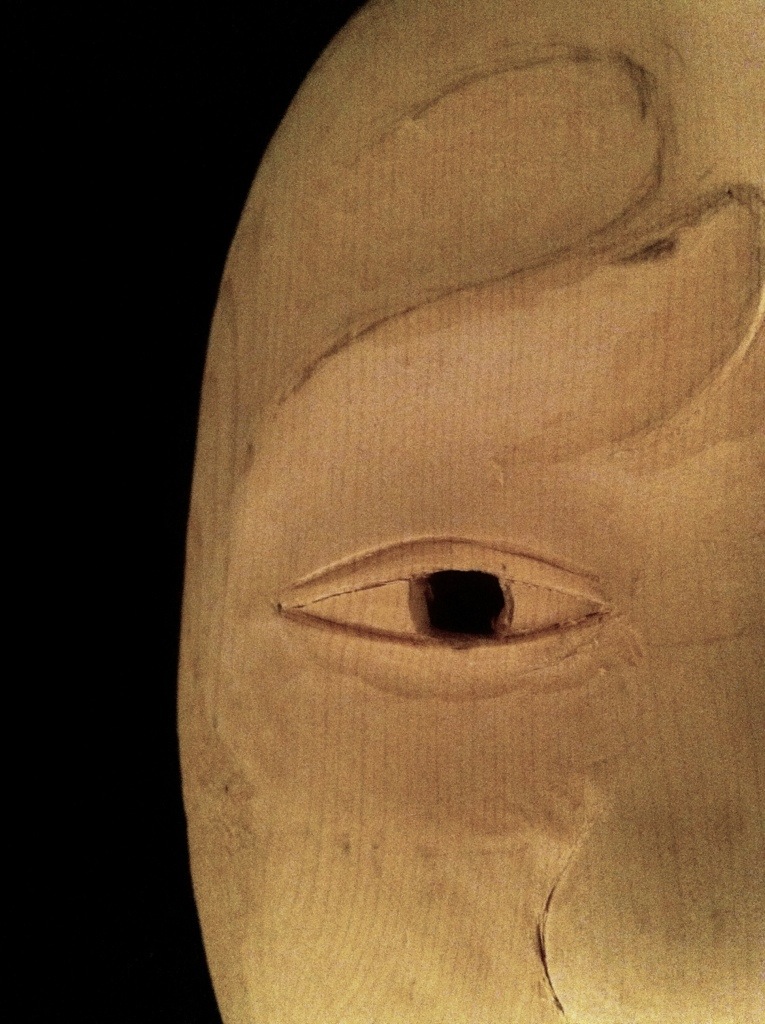 Today I had okeiko with my teacher’s eldest son Udaka Tatsushige. He gave me precise instructions about various moments of the play which I need to improve. Among all suggestion there is one thing I need to be particularly aware of: if my movements are too dynamic or extreme, if they are too ‘expressive’, it will be to the detriment of the costume. Reflecting on this I realised how much the costume, along with the mask, already does a lot of the narration just by being there on stage. It is important to establish a good relationship with the costume, restraining your movement, compressing your energy. If your acting crosses the line, the costume will disappear, only your movements will be visible. The costume has been perfected through centuries to serve its expressive purpose on stage: let’s make sure it has enough room to say what it has to say.

The mouth is now open. Kiyotsune is getting ready to tell his story.

In this picture you see Hea-Kyoung carving the chūjō mask I will use for Kiyotsune. At the bottom left is one of Udaka-sensei’s chūjō which is used as a model. A the top of the picture you can see paper shapes used to check the progress of specific portions of the mask.

In the picture below you can clearly see the mouth just after being opened. ‘Frowning’ eyebrow marks are also deeper now.

I consider myself a very ‘lucky’ (in the commonsense meaning of the term) person in many ways. Among these, one of my favourite is having a partner who carves Noh masks. Not only it is interesting to share a passion with someone who has a  different insight from yours, but also it is wonderful to be working towards the same goal, in this case my first Noh, Kiyotsune. Hea-Kyoung has been working on this Chūjō (中将) under the supervision of Udaka-sensei. This is a rather standard version of Chūjō (the name of a military rank, sometimes translated as lieutenant or captain – if you know more let me know), used for roles of young warriors of the Heike clan, or for roles of aristocrats, as in the Noh Tōru. I will talk about this mask more in future post – for now here are a couple of pictures of how Kiyotsune’s face is coming into being.

The 2013 Word Figure Ice Skating Championship is now over – Kim Yuna (KOR) Carolina Kostner (ITA!) Asada Mao (JPN) on the podium. Watching the competition on TV reminded me of an interesting post I saw years ago on this blog. It is an interesting comparison, probably produced by some ice skating idol fan, between the faces of Kim Yuna and Asada Mao, and those of Noh masks and Buddha statues. Have a look. 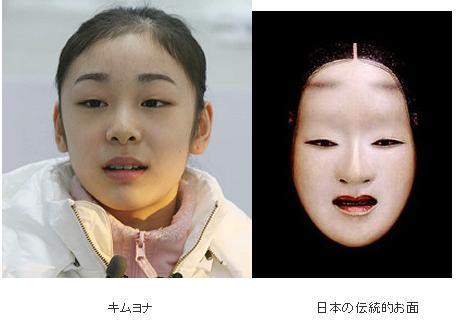 Kim Yuna is compared to the Noh mask Zo-onna, used for roles of goddesses or celestial beings, such as the Tennyo in Hagoromo. Though I think Zo-onna is a more mature face than Kim Yuna at the time of this shot (probably some 5-6 years ago) there are some interesting similarities between the two. This can only prove one thing: Kim Yuna is gorgeous.

Asada Mao, instead, is compared to two sculptures of Bodhisattva, supernatural beings that decide to renounce to becoming ‘full Buddha’ and stay in ‘this world’ in order to help mankind reach enlightenment. I am not sure about the first picture, but I like the comparison with one of my favourite representations of Miroku Bosatsu (the Bodhisattva of the Future), sitting with a foot resting on the knee, the hand close to his face, with the index delicately touching the cheek. The childish face of young Asada Mao, with a high eyebrow arc resembles to that of this meditating Miroku Bosatsu, though I think it is too childish to be compared to the otherworldly face of a Bodhisattva.

I tried but failed to find the source of the pictures (they seem to have spread over so many websites that I can’t find the original).

Dance Drama of the Samurai

This special exhibition presents a selection of traditional masks, costumes, and musical instruments that evoke the solemnity and celebratory splendor of Noh, while woodblock prints illustrate the performance on stage.

‘Warriors and Women of the Heike Clan’

UDAKA Michishige’s work as Noh mask carver has been collected in various picture books, among which The Secrets of Noh Masks published by Kodansha International.

At the Kyoto Prefectural Center for Arts and Culture 2nd Floor
Kawaramachi Hironokoji-sagaru, Kamigyo-ku (across from the Prefectural Hospital)
10:00 a.m.~6:00 p.m. (5:30 p.m. on the 28th)
28th （Wednesday）1:30 p.m. Talk and Costuming Demonstration by UDAKA Michishige

I know very little of Yayoi Hirano’s work but I found this interesting clip on YouTube which, in its brevity and simplicity, reveals the most basic issues of exportation of traditional Japanese theatre to the West, and hints at some of the most common reasons for contemporary artists who seek refuge from traditional regimentation elsewhere.

I am unsure of the quality of the work here shown, but I would like to invite anyone in the Noh to check her description of the O-Kasshiki mask toward the end of the clip.