This is the face of traditional theatre on the national ‘educational’ channel, NHK’s Eテレ (e-tele), broadcasting programs on traditional performing arts between 22:00 and midnight. In a roundtable on the decrease of Noh amateur population published on Nogaku Journal in 2010, critic Horigami Ken complained about how dull TV programs are today, claiming that the absence of classical arts on TV is one of the reasons why young people today are not interested in Noh.

Yes, I too would like to see more Noh on TV and, preferably, I would not like to see it introduced by this nice&tidy couple of presenters, interviewing old geezers and kind baachan dressed in sober kimono, gently bowing and speaking in softly. Noh is everything but gentle or soft. It’s not something to be nodded at from behind a glass case (be it a TV set or a museum stand). Noh is magnificent, powerful, heartbreaking, enlightening. Not for the faint of heart, I daresay. Have you seen this program? Certainly NHK, like much of the Noh establishment, don’t care much about trying to reach new audiences, and only feed the progressively aging spectatorship that started following it in the 1960s. Noh is not only for them. Give us the real thing, not this pre-digested glop, only good for retirement home entertainment. 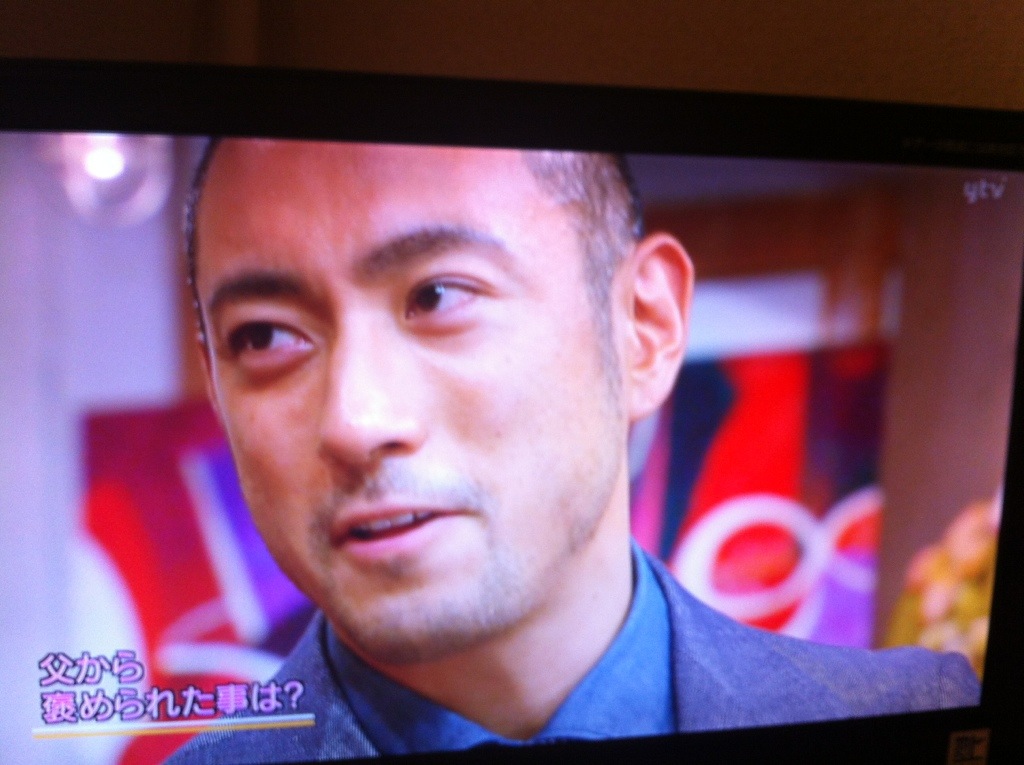 I’m watching Ichikawa Ebizo on a TV talk show, just one month after his father, Danjuro XII, passed away. The atmosphere is light, as is the general tone of talk shows in Japan. My first reaction was: “what?! Is he already there on TV??” This makes me think on how death and mourning are treated differently in Japan as opposed to Italy, where appearing on such talk show shortly after the death of the father would be inappropriate for a celebrity. Catholicism vs Buddhism, I suppose…

[21/08/13] Following up on this – this morning an interview of his late father Danjuro XII was on TV. After the airing the commentator said with a smile ‘… and these were the late Ichikawa Danjuro XII’s thoughts on his art. We are looking forward to seeing his son Ebizo continuing the Danjuro tradition – it is wonderful to see this tradition continuously evolving’. I almost cried.

This is the worst of the off-topics of a Noh specialist, but… as I am preparing a Kabuki class for my 2nd year drama school students, I was browsing YouTube searching for interesting videos that might show the ‘behind-the-scenes’ of a Kabuki production. I bumped into the video below, a Kirin Beer commercial featuring Ichikawa Danjuro XII (thank you Matt for the identification) posing as Kamakura Gongoro from the play Shibaraku. So far nothing special – Kabuki actors often feature commercials for famous brands of tea, beer, etc. What caught my attention, though, comes towards the end of the commercial, when Danjuro is portrayed as having a refreshing beer after the performance, surrounded by a group of foreigners in tuxedos, who listen in amusement to his stage tales.

It is not uncommon to see foreigners featuring Japanese commercials, sometimes playing comic character, most often portraying cast-types of various Western ethnicities (a while ago I saw this ‘Italian’ whose nose really pierced the screen). However, this scene in the Kirin commercial somehow reminded me of the imagery of the ‘honourable guests’, Western visitors – diplomats and academics – that during the Meiji period attended Noh performances, and of whom the Noh establishment took much pride. In those days, Kabuki was considered popular and vulgar, hence unsuitable to entertain the high-ranking foreign guests. Of course, things have now changed, and despite a certain look of disdain from the world of Noh, Kabuki is by all means considered one of the treasure of Japanese traditional culture, and is often promoted internationally. Mukashi mo ima mo, the Japanese tradition takes advantage of the foreign eye on it in order to improve its self-image, and this seems to have been quite clear to the writer of the Kirin commercial, who carefully devised the script so that Danjuro would be the star not only of an indigenous product, but of an art of international value. And so is Kirin.